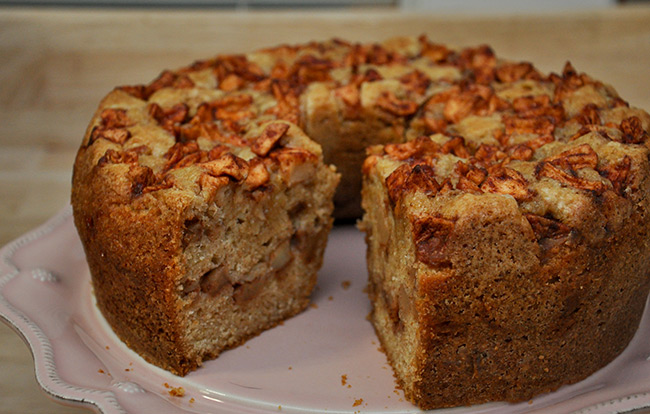 I thought that I was just about done for the year with apples. I had received so many apples free from my co-worker that I was beginning to think I never wanted to peel another apple again, but alas, my father-in-law dropped off three huge bags of apples that he bought at the orchard up the road from us. He knew that one variety was McIntosh, but the other bag he told me were baking apples. “Baking apples” is a rather vague variety, but in all honesty they seemed to all be the about the same. Apple season is over here, so I believe that the were a bit past their prime, but they still tasted really nice in this cake. I think we will use the rest of them to make applesauce. They just won’t hold their shape for pie baking or even apple crisp. This recipe is adapted from smitten kitchen. I increased the apples, changed the flour to include whole wheat, and added cinnamon to the batter as well as the apples. I also tweaked a bit of the procedure, but the recipe originated from there and it is a really tasty and moist cake. It might be a nice breakfast for Thanksgiving morning, unless you are going to fast until the big meal!