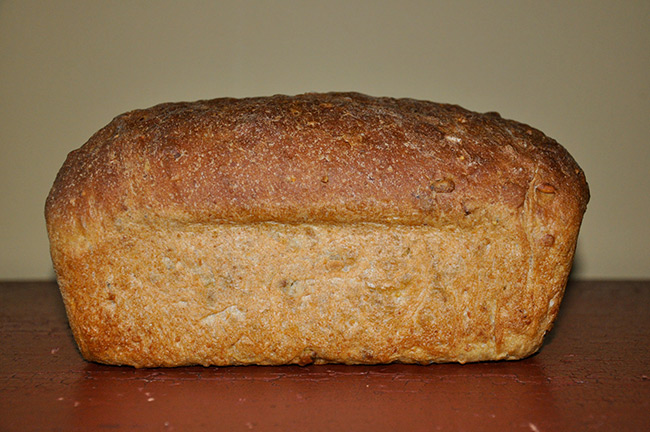 This recipe came to me from one of my favorite students.   She was having trouble  getting this dough to rise up fully during the final rise. The problem was purely aesthetics, because the flavor was delicious and well received by everyone she fed it to.   So I told her I would take a look at it and see if I could help resolve the problem. I believed the bread was struggling to rise due to the  high proportion of seeds and whole wheat flour to bread flour.

I tried the recipe first just as she sent it to me, and like she  said to me in class it was really tasty due to all those nutty seeds and sweet oats, but it was a little flat in shape.   So, I gave it another try this time with more whole wheat flour instead of bread flour. Whole wheat flour absorbs more moisture so I thought it might make the dough a little less sticky when kneading. I also made sure to knead it longer so that it really passed a windowpane test. This would make sure that it had enough strength to lift all those heavy seeds. This loaf came out better. It rose a bit higher, but it still wasn’t as high as I wanted. The final attempt I resorted to adding a bit of vital wheat gluten. I am not usually one to add in dough conditioners but this time more strength was required. I chose to start with really the bare minimum and see what the results looked like. I think the two loaves came out great. They rose beautifully and their interior crumb was a bit stronger. You can probably use up to a tablespoon of vital wheat gluten before your final bread would become chewy.