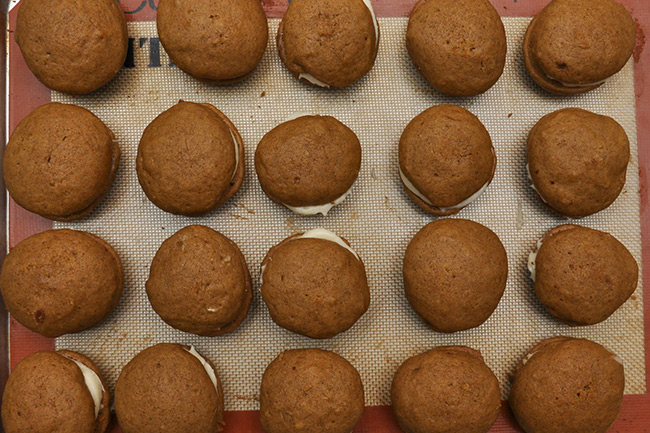 My son, Parker, used to eat everything I tried to feed him up until he was about 15 months old. Now he is nearing 19 months and gives me the tight-lipped, “I refuse to eat that concoction you call food” face. That is until I fed him these. I did not even assemble them yet, I just grabbed one that was still slightly warm off the cooling rack and gave it to him as a pre-dinner snack. The first look he gave me was one that made me think he was going to throw it to the floor for the dog, but for some reason he gave it a second look and took a bite. He then proceeded to eat two more whoopie pie halves, followed by a pretty complete dinner, summed up with half of a completed pumpkin whoopie pie. Now for those of you out there who think that I am a terrible mother for feeding my son cakes instead of healthy vegetables, I hear you. I was feeling pretty guilty about it myself, but then I rationalized that there is healthy pumpkin in these and dairy and protein in the cream cheese filling. I am not saying that I am going to feed him like this all the time, but it was truly great to see him eat without fighting with me.